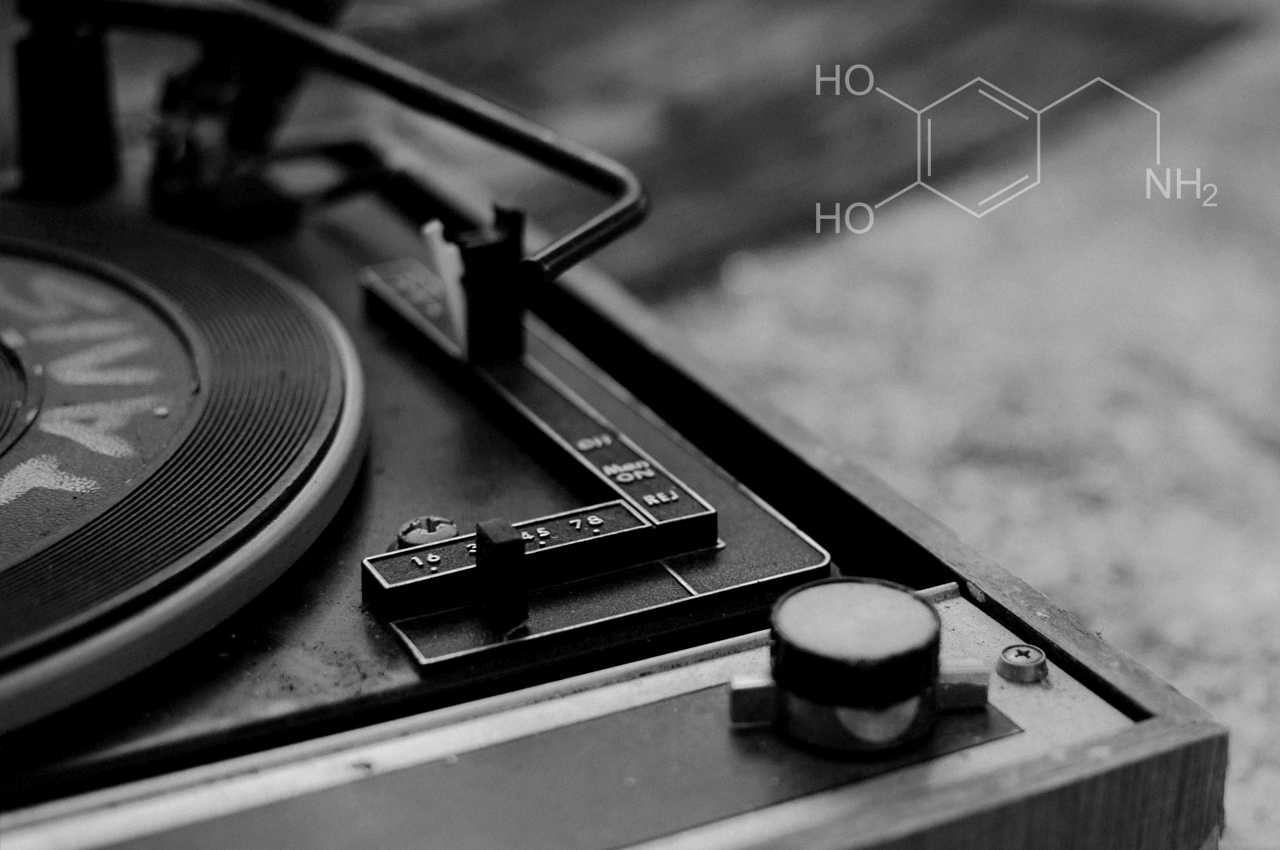 Cocktail of neurotransmitters, hormones, and other body chemicals,
particularly the „pleasure chemical“ dopamine.

We start with the last track of 1978 Gafieira Universal. Banda Black Rio were one of the great Brazilian bands of the 1970s and 80s. Formed by saxophonist Oberdan Magalhães, they were pioneers of the country’s soul, samba and funk movement, and played a key role in Rio’s black music scene in the days of the military dictatorship.
One of the tightest Funk group ever.

“Street Music is what I always called it because it came from the top off my head and we never rehearsed,” says a spry, 84-year-old Bill Curtis, the longtime session-drummer and maestro behind The Fatback Band. “Everything was just raw energy. Most of the guys had no idea until it was time to do it. That’s how we made all our first records.” In 1975 (Are You Ready) Do The Bus Stop you can here what they talking about. Especially in the mix with Sarah Ruba is to here how modern this track is today.

Deeper is Soul and Funk at it’s best! A decade into the formation of Dumpstaphunk, the New Orleans all-star collective Ivan Neville (vocals, B3 and Clav), the double bass attack and soulful voices of Tony Hall and Nick Daniels III, Ian Neville on guitar, and the monster addition of Nikki Glaspie (formerly with Beyonce s all-female band) on drums.

From the same area we got Galactic, an amazing groovy Band. Dolla Diva is modern groover at it’s best. Maggie Koerner and David Shaw are giving the track a full drive. The next band is Dopapod who was formed at Boston’s Berklee College of Music in 2008. Difficult to describe their style. Something between Fusion, Rock and ??. Turnin‘ Knob is funky and an killer track that shows what’s the talent behind this band.

Ed Motta departed to begin his solo career, recording his debut Um Contrato Com Deus, where he played almost all the instruments by himself. He is a legend in Brasil. Seminal groove band The Greyboy Allstars are fast approaching their 25th year together. The current line-up—saxophonist Karl Denson, guitarist Elgin Park, keyboardist Robert Walter, bassist Chris Stilwell and drummer Aaron Redfield—is home to some of the most revered players on the modern music scene.

During the seventies, Paris born drummer and percussionist Sylvain Krief was one of France’s top musicians. 1976, Sylvain Krief had founded a new band Airto Fogo, who had recorded a new album at Studio Davout in Paris. Little did they know that when Airto Fogo was released by Decca, it would go onto to become a cult classic.

For the true expert on Brazilian Funk scene, no further explanation is needed for Di Melo. After all, the singer from São Paulo has been at the forefront of the genre for more than 40 years – even though he was long regarded as an insider tip along with greats such as Jorge Ben or Tim Maia. However, his first album „Di Melo“ is without a doubt one of the most significant works of the Afro-Brazilian movement of the seventies.

The Sure Fire Soul Ensemble is a heavy, original, instrumental soul band based in San Diego. They draw influence from the masters of the style from the past and modern day. Really fresh! Formed late in 2008, it didn’t take long for six piece band Dojo Cuts to become Australia’s hottest heavy funk unit. The band combine crisp, tight, funky instrumentals with some killer vocals by the delectable Roxie Ray that are in equal parts power and grit.

Cocktail of neurotransmitters, hormones, and other body chemicals, particularly the „pleasure chemical“ dopamine. by Funkologie on Mixcloud