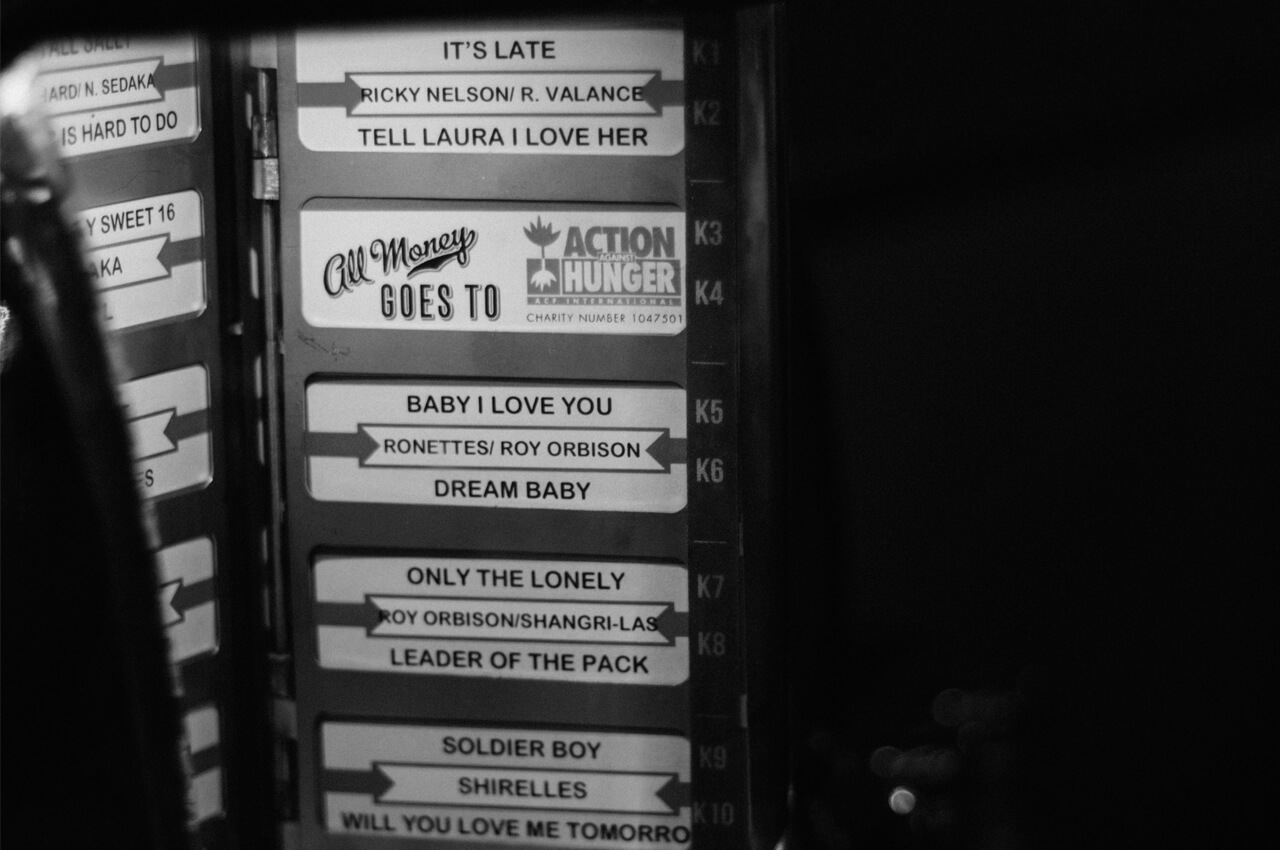 If I had a jukebox, these would be the tracks that would be on it. Music covers and recovered tracks mainly cribbed from the Fab 4, other british invasion bands and american successes of the 60/70’s.

“Hey Jude” is the ninth studio album by Wilson Pickett. Also released as a single was the cover of Steppenwolf’s “Born to Be Wild”. The album is particularly noteworthy for the early appearance of guitarist Duane Allman. Rhythm Section member Jimmy Johnson later credited Allman’s performance on this album as the beginning of Southern Rock.

“Keep On Runnin‘” is the third and final album by funk group Black Heat. “Drive My Car” was the first track on the Album released in 1975.
“Maggie’s Farm” is a song written by Bob Dylan in 1965 and released on the album “Bringing It All Back Home”. One of the first cover versions was a Solomon Burke Version, he was the first black singers to record a Bob Dylan song who released also in 1965 just prior to Dylan’s own single release.

“Money (That’s What I Want)” is a rhythm and blues song written by Tamla founder Berry Gordy and Janie Bradford. Barrett Strong recorded it in 1959 as a single. Many artists later recorded the tune, including The Beatles in 1963 and the Flying Lizards in 1979. Collaborating with former James Brown’s background singer Martha High and recording many albums, the Shaolin Temple Defenders from Bordeaux plays the cool cover of the Beatles “Taxman”.

Jackie Wilson was one of the most distinctively dynamic soul performers of the 1960s. Few singers could match his vocal range or his pure physicality onstage. He was a genuine original, and his stylistic innovations in the 1950’s were as important in the evolution of American pop, rock, and soul as those of James Brown, Nat King Cole, or Sam Cooke, despite the fact that his recordings seldom enjoyed the commercial impact that theirs did. His The Doors cover was the first track of the B-Side of 1968’s “Do your thing”.

“Get Ready” is a Motown song written by Smokey Robinson. The version by The Temptations was released in 1966. The version by Rare Earth in 1970 was most succesful and known version. A rollicking vocalist and gifted harmonica player, Syl Johnson has forged a career in both blues and soul. “Is It Because I’m Black” is characterized by socially conscious songwriting, especially in the seven-and-a-half-minute title track, an elongated, serious statement of black pride with a sad funk-blues groove. “Come Together” was on the Album of 1970.

“Moon Shadow” is the second album of trio Labelle from 1971. Patti LaBelle, Nona Hendryx and Sarah Dash sings the nine-minute title song “Moon Shadow” from Cat Stevens. On the mix a version of the “The Funk Scene” compilation. A highlight of the mix!
Recorded in Philadelphia in 1969, The Deirdre Wilson Tabac’s album is a good blend of funk, jazz and soulful pop. Possessing the complex grooves, thrilling breaks and ethereal weirdness. They put some hot funk into Lennon/McCartney composition “Get Back”.

Linda Lyndell, a white singer who had been a support act with James Brown and Ike & Tina Turner and then recommended to Stax Records by Otis Redding, recorded “What a Man”. The song was essentially improvised by Lyndell. The record came to the attention of white supremacists in the Ku Klux Klan, who threatened Lyndell for associating with black musicians, as a result, she largely withdrew from the music business for the next 25 years!

“Some Kind of Wonderful” is a song written by John Ellison and first recorded by his group, Soul Brothers Six in 1967. The best known version is by Grand Funk Railroad from 1974 reached a huge success.
Lee Moses is highly regarded within the deep soul genre. The funky “Day Tripper” was released as a 45’s in 1967. David Porter has over 1700 songwriter and composer credits for a range of artists! He cut several albums for Stax in the early 1970s, including a concept LP, “Victim of the Joke?” which includes an upbeat cover of The Beatles “Help!”.

“Please Mr. Postman” was the debut single by the Marvelettes for the Tamla (Motown). The single achieved this position in late 1961 and has been covered several times, including The Beatles in 1963.
Tina Britt’s sassy and powerful vocals match the ultra funky guitar and raw to the bone drums of Steppenwolf’s “Sookie Sookie” in 1969.
“Everybody’s Got Something to Hide Except Me and My Monkey” is a song by the Fab 4 from their 1968’s “White Album”. Fats Domino covered this fine song in 1969. For us the second highlight!

“Quinn the Eskimo (The Mighty Quinn)” is a folk-rock song written by Bob Dylan and first recorded during “The Basement Tapes” sessions in 1967. The song was recorded in December 1967 and first released in January 1968 as “Mighty Quinn” by the British band Manfred Mann and became a great success. Solomon Burke’s version is on an album released in 2000.
Bobby Taylor & the Vancouvers were a Canadian soul band from Vancouver, British Columbia, Canada. The group recorded for the Gordy Records division of Motown Records in 1968. The faboulous Marvin Gaye “I Heard It Through The Grapevine” is the self titled Album. Amazing Cool!

Throughout his career, Washington-area singer/composer Phil Flowers penned hundreds of rock, blues, gospel, and ballad tunes. His version “I Saw Her Standing There” is a song by the Beatles and was the opening track on the band’s 1963 debut album “Please Please Me”.
“I’ve Got a Feeling” is on the last album “Let It Be”. The song features Billy Preston on electric piano. The title was on Preston’s 1970’s “Encouraging Words” after the break of the Fab 4.

“Jealous Guy” is a song by John Lennon written by him and produced in 1971 in collaboration with Yoko Ono and Phil Spector. The melody was written in 1968, when Lennon was still a member of the Beatles. Donny Hathaway sings it 1971 on his recorded live performance. There is also a beutiful box set released in 2010 with a studio version on it.
“Time Is on My Side” is a song written by Jerry Ragovoy (using the pseudonym „Norman Meade“). First recorded by jazz trombonist Kai Winding and his Orchestra in 1963, it was covered (with additional lyrics by Jimmy Norman) by both soul singer Irma Thomas and the Rolling Stones in 1964.

“Dear Prudence” also from the “White Album” was covered by various artists. It was also on a B-Side from The 5 Stairsteps & Cubie released in Spain 1970. Bettye LaVette’s “Heart of Gold” of Neil Young was also first released as a single in 1972. A little pearl of the mix.
Aretha Franklin claims her place in the story by switching it to the first person, singing, “I’m Eleanor Rigby / I pick up the rice in the church where the weddings have been, yeah.” It’s a boldly in-your-face reinvention of the song, with the Muscle Shoals house band revving up the R&B tempo as she wails, “All over the world, the lonely lonely lonely people—where do they all belong?”

“Brown Sugar” is a song by the Rolling Stones. It is the opening track and lead single from their album “Sticky Fingers” (1971). Little Richard covered the song while he was signed to Reprise Records for the Album “The King of Rock and Roll” also in 1971. Etta James’s powerful, deep, earthy voice bridged the gap between rhythm and blues and rock and roll. This is noticeable in 1975 produced version of Steppenwolf’s “Powerplay”!

“Wild Horses” also from the Stones‘ “Sticky Fingers” was also found on the debut album of LaBelle released on 1971. The final bouquet is surely Eddie Hazel’s “I Want You (She’s so Heavy)” and shows the master of guitar in top form. Found on “Games, Dames and Guitar Thangs” (1977).

Jukebox Heroes. by Funkologie on Mixcloud