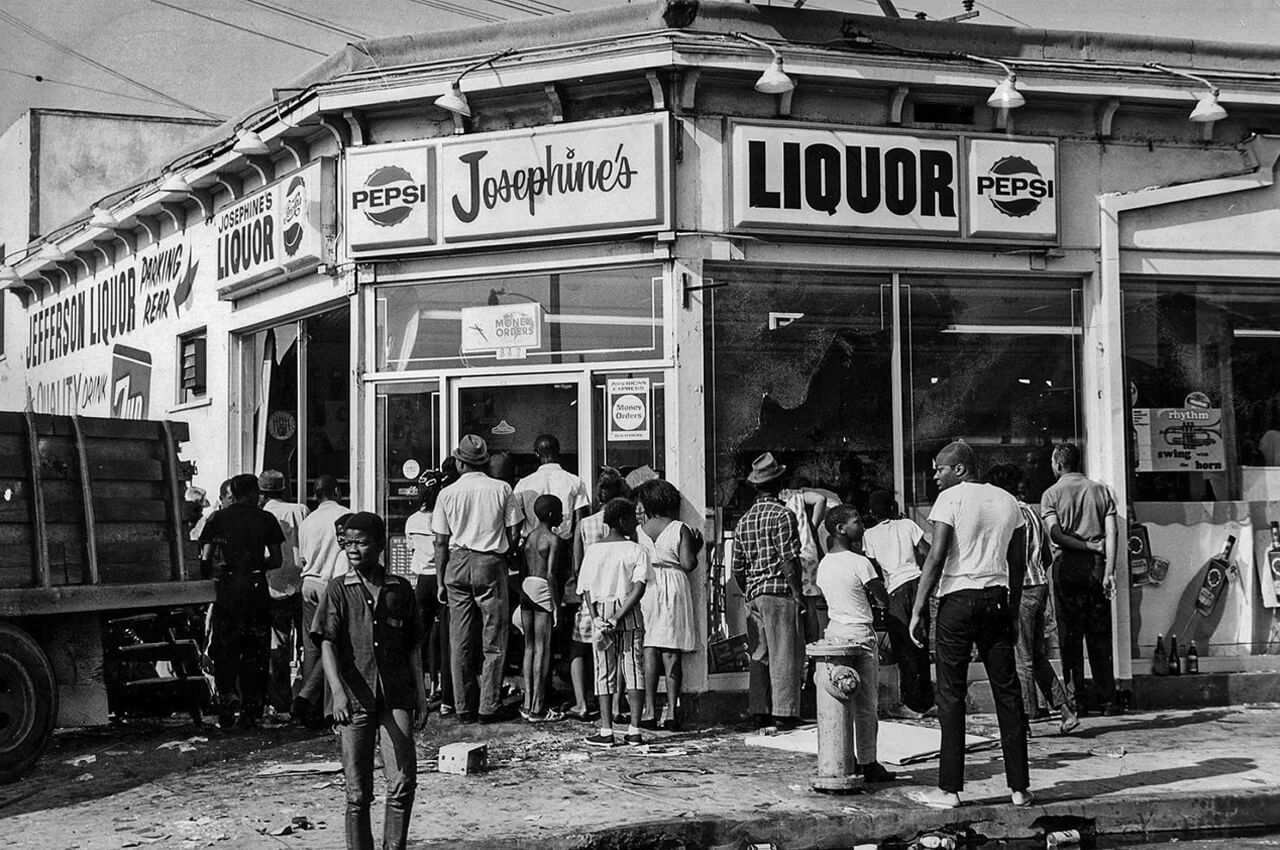 The event that precipitated the disturbances, the arrest of a black youth by the California Highway Patrol on drunk-driving charges, actually occurred outside Watts. Watts suffered further in the 1970s, as gangs gained strength and raised the level of violence in the neighborhood. Between 1989 and 2005, police reported more than 500 homicides in Watts, most of them gang-related and tied to wars over control of the lucrative illicit market created by illegal drugs. Four of Watts’s influential gangs— Watts Cirkle City Piru, Grape Street Watts Crips, Bounty Hunter Watts Bloods, and PJ Watts Crips. Key hallmarks of the pact continue to influence life in Watts to date, with colors and territory having little to do with gang-related crime.

About the artists on this mix

Almost Grown – The Link Quartet
Few Italian musicians can claim to have done regular coast to coast tours in the USA. The Link Quartet is one of them, not so much because of its popularity, but rather because of the niche it comes from: a music dominated by Hammond sounds, which brings it attention and praise in mod circles.

The Watts Breakaway – Johnny Otis Show
Johnny Otis importantly was a key pioneer in the development of R’n’B into Rock and Roll, and as such deserves a blue plaque and other such honours. He discovered – amongst others – Etta James, Esther Phillips and Little Willie John, and his band backed Big Mama Thornton on the original version of “Hound Dog”. He scored umpteen hits first in the post war rhythm and blues boom and then on Capitol as Rock and Roll took over.

The Jungle – Flyjack
Austin based group Flyjack is a direct throw-back to sounds and style of the ‘60’s and ‘70’s era funk/soul scene. Along with their lengthy original song list, Flyjack focuses on bringing back righteous rare grooves, dynamite b-sides, and superbad funk that runs hotter than a ‘69 Cadillac on high octane.

Total Destruction to Your Mind – Swamp Dogg
In 1970 the Southern soul music maverick Jerry Williams Jr. made the most radical move of his career. Frustrated with music business politics Williams reinvented himself as Swamp Dogg, an irreverent anti-hero smashing the conventions of commercial R&B music.

I Wanna Do the Do – Bobby Rush
After decades of tearing up the chitlin’ circuit on a nightly basis with his sweaty, no-holds-barred funkfests, Bobby has thoroughly broken through to the mainstream. He won a long-overdue 2017 Grammy for his spectacular album Porcupine Meat and consistently tours the globe as a headliner.
“I Wanna Do the Do” is from the Album “Rush Hour” from 1979.

More Mess on My Thing – The Poets Of Rhythm
When we are hearing tracks from The Poets of Rhythm, it’s time to stop what you’re doing like Digital Underground and take a pause. These cats aren’t ruining the image and the style that you’re used to, but rather making and leading a funk revival from the very beginning. “More Mess On My Thing”. Bringing it back to the early ’70’s, Part 2 nods to The Meters, starts funky and ends funky. Lots of Hammond organ sounds beaming through.

Izabella – An Apple A Day, Lee Fields
“An Apple A Day” is a funk/soul collaboration between friends and record labelmates Paolo Apollo Negri, Craig Kristensen, Kapper Dapper and Mario Percudani. In 2008 Paolo, Craig and Kapper came together on the project “Fred Leslie’s missing Link” and released the album “Fat Lip” for Hammondbeat Records and played several gigs around Europe. After reaching some radio success on BBC, largely due to heavy rotation from “The Craig Charles Funk & Soul Show”, the band decided to come together again, and “An Apple A Day” is the result of this. The album “Yes We Can” is an album that consists of a variety of cover tracks, each featuring one of todays most talented vocalists.

Thriller – Speak Low
Speak Low were a Spanish funk combo based in Madrid, that formed in 2002. The band was founded by Julian Maeso, Jose García and Antonio Pax. They have released two albums, and five singles. The band split up in 2011, their farewell concert being only in 2012 on the Moe Black Music Festival.

The Truth Shall Make You Free – King Hannibal
The Mighty Hannibal was a soul and funk singer, songwriter and record producer. Known for his showmanship, and outlandish costumes often incorporating a pink turban, several of his songs carried social or political themes. His biggest hit was “Hymn No.5”, a banned from radio comment on the effects on servicemen participating in the Vietnam War.

A Mother’s Prayer – Joe Tex
Joseph Arrington Jr. alias Joe Tex was a musician who gained success in the 1960s and 1970s with his brand of Southern soul, which mixed the styles of funk, country, gospel, and rhythm and blues. “A Mother’s Prayer” is from 1972.

What You See Is What You’re Gonna Get – Brenda George
Appeared on the amazing Superfunk Compilation!
The song was released in 1973.

Rise Up – The Freedom Affair
The Freedom Affair is a 9 piece soul juggernaut from Kansas City, MO led by three powerhouse vocalists Paula Saunders. The Freedom Affair formed in 2017 with a vision to write original soul music inspired by the traditions of the genre’s past with a universal message looking toward the future.

Livin‘ with Love – T Bird and the Breaks
Tim Crane landed here in Austin only after doing a bit of research. The frontman of one of the city’s newest and baddest R&B outfits, T-Bird and the Breaks, was living and gigging in Massachusetts, longing for a fresh scene.

Three People In Love – Mack Rice
Rice was a member of vocal group The Falcons from 1957 to 1963. In 1965 he wrote and released “Mustang Sally”, his greatest hit as a solo artist that was covered the next year by fellow ex-Falcon Wilson Pickett. Rice later joined Stax Records, where he (co-)composed song such as “Respect Yourself” who was recorded by The Staple Singers in 1971. “Do The Funky Penguin” for Rufus Thomas also in 1971 and “Cheaper To Keep Her” for Johnnie Taylor in 1973.

One Day – Kings Go Forth
Kings Go Forth are a ten-piece American soul band from Milwaukee, Wisconsin. Their sound is rooted in 1970s soul, and the group employs production and recording techniques common in that era.

My Mind Was Messed Around At The Time – Eddie Floyd
Is from 1971’s “Down to Earth”. Eddie Co-founder of vocal group The Falcons in 1955. Soon after that group was disbanded in 1963 he joined the Stax Records label as a songwriter and producer. Later also a recording artist for the label, he had his biggest hit with “Knock On Wood” in 1966.

The Watts Breakaway. by Funkologie on Mixcloud