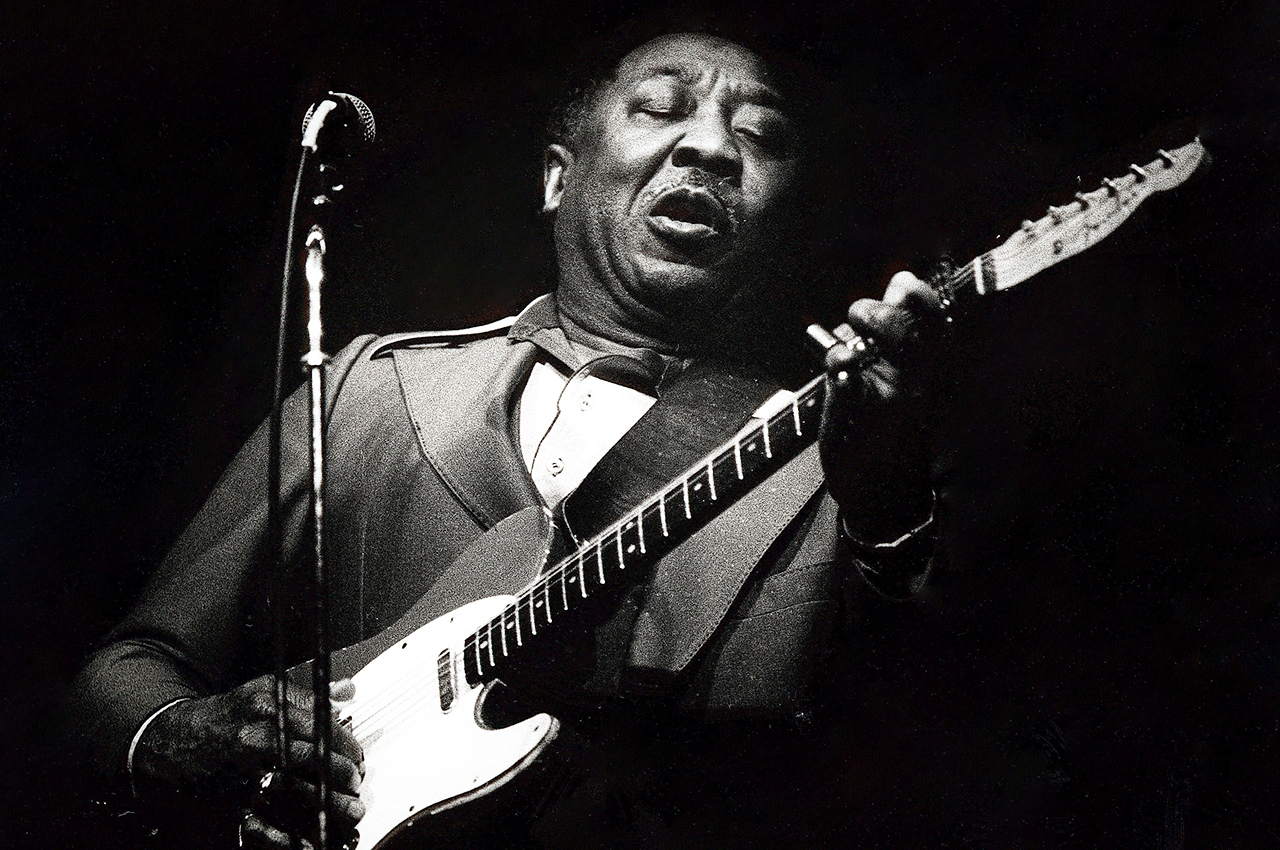 Diving Duck Blues is a retrospective of all blues music I used to listen from teenager age until today. This is not a purist mix but what I love about the Blues. From my mother and my friends. This mix is dedicated to my “compadre” Phil and all Blues fans out there. Enjoy….

Dust My Broom – Elmore James
Elmore James was known as „King of the Slide Guitar“ and was noted for his use of loud amplification and his stirring voice. Elmore will always remain the most exciting, dramatic blues singer and guitarist that I’ve ever had a chance to see perform in the flesh.

Oh, Pretty Woman – Albert King
Albert Nelson known by his stage name Albert King, was an guitarist and singer whose playing influenced many other blues guitarists. He is perhaps best known for the popular and influential album Born Under a Bad Sign (1967) and its title track. He, B.B. King and Freddie King, all unrelated, were known as the „Kings of the Blues. The left-handed King was known for his „deep, dramatic sound that was widely imitated by both blues and rock guitarists.“

Working Man – Otis Rush
Rush was left-handed and played as such. However, his guitars were strung with the low E string at the bottom, upside-down from typical guitarists. He often played with the little finger of his pick hand curled under the low E for positioning. It is widely believed that this contributed to his distinctive sound. He had a wide-ranging, powerful tenor voice.

Diving Duck Blues – Taj Mahal
Henry Saint Clair Fredericks who uses the stage name Taj Mahal, often incorporates elements of world music into his works and has done much to reshape the definition and scope of blues music over the course of his more than 50-year career by fusing it with nontraditional forms, including sounds from the Caribbean, Africa, and the South Pacific. In 1968, he performed in the film The Rolling Stones Rock and Roll Circus. He recorded a total of twelve albums for Columbia from the late 1960s into the 1970s.

Iceman – Albert Collins
Albert Gene Drewery, known as Albert Collins and the Ice Man was an electric blues guitarist and singer with a distinctive guitar style. He was noted for his powerful playing and his use of altered tunings and a capo. His long association with the Fender Telecaster. The Release Date of “Iceman” was 1991.

Prodigal Son – Johnny Winter
Winter caught his biggest break in December 1968, when Mike Bloomfield, whom he met and jammed with in Chicago, invited him to sing and play a song during a Bloomfield and Al Kooper concert at the Fillmore East in New York City. As it happened, representatives of Columbia Records (which had released the Top Ten Bloomfield / Kooper / Stills Super Session album) were at the concert. Winter played and sang B.B. King’s “It’s My Own Fault” to loud applause and, within a few days, was signed to what was reportedly the largest advance in the history of the recording industry at that time.

Earth Blues – Jimi Hendrix
Again Jimi because it has to be :-). From the posthume Album “People, Hell And Angels”.

Blue Jean Blues – ZZ Top
“Fandango!” is the fourth album of the Texas Band released in 1975. The album’s first side consists of selections from live shows, with the second side being studio recordings.

Since I’ve Been Loving You – Led Zeppelin
The song was recorded live in the studio for “Led Zepplin III” with very little overdubbing. It was reportedly the hardest to record.

Living In The House Of Blues – Luther Allison
He moved with his family to Chicago in 1951 and attended Farragut High School where he was classmates with Muddy Water’s son. He taught himself guitar and began listening to blues extensively. Three years later he dropped out of school and began hanging around outside blues nightclubs with the hopes of being invited to perform. Allison played with the bands of Howlin‘ Wolf and Freddie King, taking over King’s band when King toured nationally. Allison died on August 12, 1997, five days before his 58th birthday. One of the hottest Blues Live Act.

Going Down – Freddie King
In 1969 King hired Jack Calmes as his manager, who secured him an appearance at the 1969 Texas Pop Festival, alongside Led Zeppelin and others and this led to King’s signing a recording contract with Shelter Records, a new label established by the rock pianist Leon Russell and the record producer Denny Cordell. The company treated King as an important artist, flying him to Chicago to the former Chess studios to record the album Getting Ready and providing a lineup of top session musicians, including Russell. Three albums were made during this period, including blues classics and new songs, such as “Going Down”, written by Don Nix.

You Gotta Move – Mississippi Fred McDowell
McDowell performed the blues in the north Mississippi style much as he had for decades, sometimes on electric guitar rather than acoustic guitar. He was particularly renowned for his mastery of slide guitar, a style he said he first learned using a pocketknife for a slide and later a polished beef rib bone. He ultimately settled on the clearer sound he got from a glass slide, which he wore on his ring finger.

Hound Dog – Big Mama Thornton
Thornton’s success with “Hound Dog” was followed three years later by Elvis Presley recording his hit version of the song. His recording at first annoyed Leiber who wrote, „I have no idea what that rabbit business is all about. The song is not about a dog, it’s about a man, a freeloading gigolo.“ But Elvis‘ version sold ten million copies, so today few fans know that “Hound Dog” began as „an anthem of black female power.“

Tom Cat – Muddy Waters
McKinley Morganfield known professionally as Muddy Waters, was an American blues singer-songwriter and musician who was an important figure in the post-war blues scene, and is often cited as the „father of modern Chicago blues“. His style of playing has been described as „raining down Delta beatitude“. In 1968, at the instigation of Marshall Chess, he recorded “Electric Mud”, an album intended to revive his career by backing him with Rotary Connection, a psychedelic soul band that Chess had put together. First rejected by the fans and later beloved.

I Won’t Do That – Joe Louis Walker
NPR Music described him as „Powerful, soul-stirring, fierce and gritty…a legendary boundary-pushing icon of modern blues.“Another music journalist noted „If you define ‚blues‘ by the rigid categories of structure rather than the flexible language of feeling allusion.

Couldn’t Stand the Weather – Stevie Ray Vaughan
Best known as the guitarist and frontman of the blues rock band Double Trouble. Although his mainstream career only spanned seven years, he is considered to be one of the most iconic and influential musicians in the history of blues music, and one of the greatest guitarists of all time.
We here in that track nearly already the solo of David Bowie’s “Let’s Dance”!

That’s What I Am Here For – Roy Buchanan
A pioneer of the Telecaster sound, Buchanan worked as a sideman and as a solo artist, with two gold albums early in his career and two later solo albums that made it to the Billboard chart. He never achieved stardom, but he is still considered a highly influential guitar player.
According to his agent and others, Buchanan was doing well, having gained control of his drinking habit and playing again, when he was arrested for public intoxication after a domestic dispute. He was found hanged from his own shirt in a jail cell on August 14, 1988, in the Fairfax County, Virginia, Jail.

Whiskey, Beer & Wine – Buddy Guy
While Guy’s music is often labelled Chicago blues, his style is unique and separate. His music can vary from the most traditional, deepest blues to a creative, unpredictable and radical gumbo of the blues, avant rock, soul and free jazz that changes with each performance. A living legend.

Don’t Owe You a Thang – Gary Clark Jr.
Gary Clark Jr. began playing guitar at the age of twelve. Born and raised in Austin, Texas, Clark played small gigs throughout his teens, until he met promoter Clifford Antone, proprietor of the Austin music club Antone’s. Antone’s was the launch pad from which Jimmie and Stevie Ray Vaughan redefined blues at the time. Soon after meeting Clifford, Clark began to play with other musical icons, including Jimmie Vaughan. Vaughan and others in the Austin music community helped Clark along his musical path.

See the Light – The Jeff Healey Band
Born in Toronto, Ontario, Healey was raised in the city’s west end. He was adopted as an infant. When he was almost one year old, Healey lost his sight to retinoblastoma, a rare cancer of the eyes. His eyes had to be surgically removed, and he was given ocular prostheses. Healey began playing guitar when he was three, developing his unique style of playing the instrument flat on his lap. At age 9 his musical talents were showcased in an interview on the TVOntario children’s programme Cucumber. Glad I saw him live on stage. Peace Jeff…

Whiskey, Beer and Wine. by Funkologie on Mixcloud