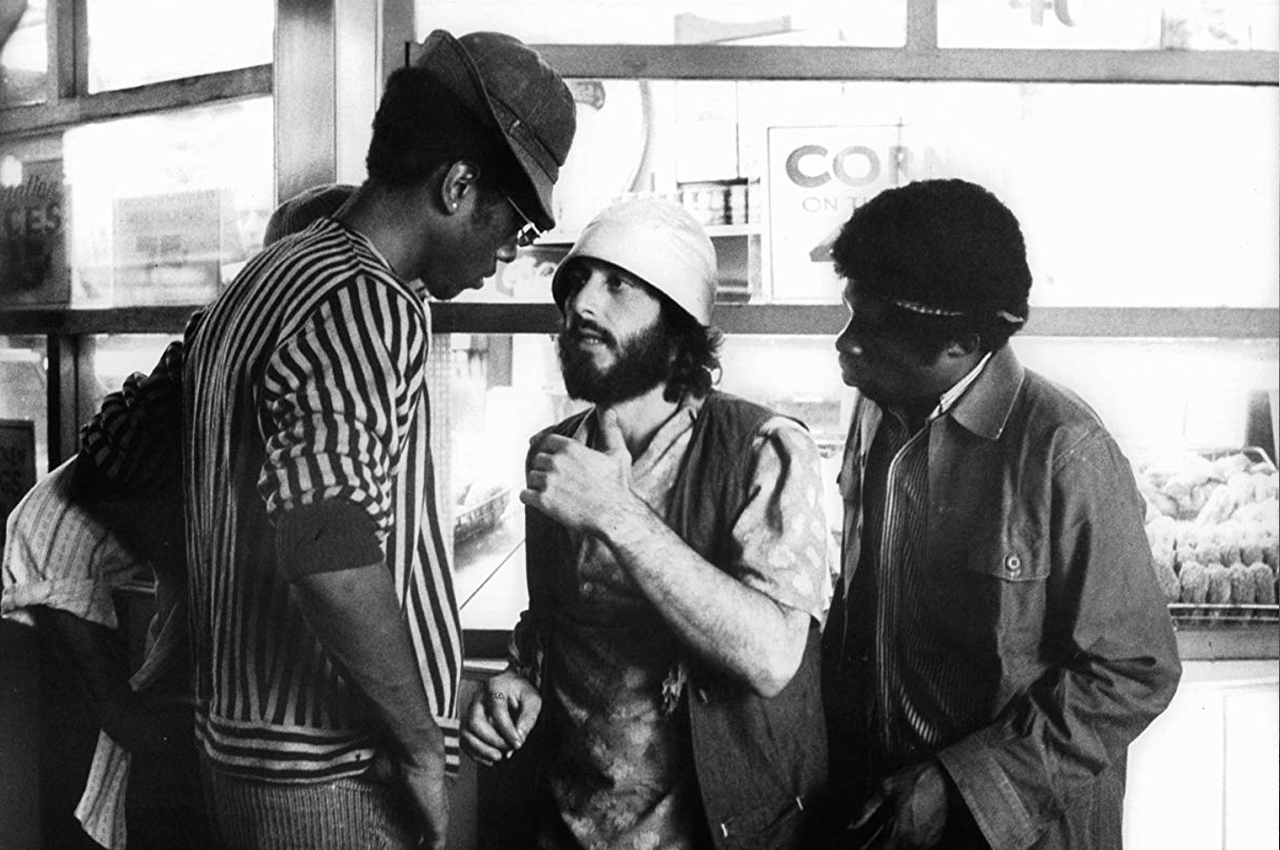 Film flair and hot funk. Our first group mix this year brings you the portion of strength and power to survive the streets :-)

This is a collaboration with our Facebook group members. The team consists of Anne McMahon, Guillaume Clémondont, Salim Srour, Tourpas Ioannis, Tito Gonzales Sarango and the Cupatee Selecta Denis Richner. Many thanks to our crew for their support! Michel from Funkologie

Barkin‘ Up The Wrong Tree

Party Time – Roy Porter Sound Machine
Was already on Fonka Donk… Anyway, Roy Porter was an American jazz drummer and bandleader who is remembered for his California session with Charlie Parker in 1946.

Barkin‘ Up The Wrong Tree – James „Big Sambo“ Young and The House
James Young and the House Wreckers is just biting the hell out of Funk. On Jet Stream records. Date unknown, but it’s the b-side to Funky Booty, which is a reworking of Jean Knight’s Mr. Big Stuff.

The Riot – Ed Bogas And Ray Shanklin
Bogas‘ contributions span four decades and several genres. In the 1960s Bogas was a member of the progressive rock/psychedelic band The United States of America. In the 1980s he started composing music for Commodore 64 computer games such as Hardball. He also wrote music for Children’s Television Workshop (Sesame Street).

A Day In The Life – Chocolate Snow
The concept behind Numero Group compilations is almost impossible to resist: they find an obscure Midwestern funk or soul. Here this beauty pointed out by Guy Wu from our Funkologie Group!

A Little Bit More Won’t Hurt – Bettye Crutcher
Bettye was part of a writing team called We Three. There were two young writers, Homer Banks and Raymond Jackson. Homer wanted to have a female point of view, there is where Bettye came in. This beauty is from her own album “Long As You Love Me (I’ll Be Alright)” from 1974.

Im Lonely For You – Bettye Swann

Stand Up – Al Green
From “Call me” (1973). The Reverend Al Green, best known for recording a series of soul hit singles in the early 1970s. After an incident in which his girlfriend died by suicide, Green became an ordained pastor and turned to gospel music. He later returned to secular music.

Chitlins & Cuchifritos – Joe Thomas
American jazz/funk flautist and occasional saxophonist. “Chitlins And Cuchifritos” is a classic track that is made up of a funk groove with Thomas blowing all over it.

Jody’s Freeze – James Reese And The Progressions
Despite being an ambitious and prolific artist back in the sixties and seventies, James Reese never realised an album of his works. The Trombonist, bandleader, songwriter, arranger and producer instead put out a series of 45s that were later discovered by Now Again.

Smiling Faces Sometimes – Bobbi Humphrey
Barbara Ann („Bobbi“) Humphrey is an American jazz flautist and singer who plays fusion, jazz-funk and soul-jazz styles. Bobbi Humphrey has performed for audiences around the world. Her flute training included classical and jazz styles in high school. The Rare Earth song was recorded on 1972 for Blue Note.

For The Love Of Money – The Armada Orchestra
1970s UK Disco Orchestra was a collection of 37 members of the London Symphony Orchestra who backed Ultrafunk and other groups. They recorded exclusively for John Abbey’s Contempo label.

Bump The Bump (Part Two) – Black Buster
Heavy funk instrumental recorded in 1975. Black Buster were a Pinoy Funk & Disco group popular in the 1970s. The band was composed of Bob Guzman, Celso Llarina, Spanky and Snaffu Rigor, Sunny and Guy Ilacad and Willy Cruz. Several of their releases were also released in Germany.

The Next Message – The Mighty Mocambos
Their many incarnations have released dozens of 45s and several albums.
They have collaborated with musical legends such as Afrika Bambaataa, Lee Fields, Ice-T, Charlie Funk, Peter Thomas or Kenny Dope, put new talent like Gizelle Smith and Caroline Lacaze on the map, brought Caribbean steel drums to funk clubs with their alter ego Bacao Rhythm & Steel Band, and have toured through all civilized parts of the continent and beyond for the better part of the last years.

Film flair and hot funk. Our first mix this year brings you the portion of strength and power to survive the streets :-) by Funkologie on Mixcloud

The Best Of Perception & Today Records

« I’m a Raggedy Bitch, But My Heart Is Amazing   Until The Last Drop »